RUS – Vikings in the east

The opening up of countries in eastern Europe has given access to a wealth of new information about those Vikings who travelled east and gained both power and immense riches. The new special exhibition at Moesgaard Museum follows in the footsteps of these Rus Vikings in the east.

Some time during the 9th century, a Viking enters the church Hagia Sophia in Constantinople, and in the upper gallery, offering a view of the gilded dome, he scratches his name in the marble parapet – Halvdan.

Perhaps Halvdan was a mercenary in the Byzantine emperor’s feared Varangian guard? Or perhaps he was just passing by?

The almost three centuries of Denmark’s history that make up the Viking Age, AD 750-1050, hold a wealth of stories about men like Halvdan, and quite a few women too, who venture out into the world from Sweden, Norway and Denmark in search of trade, goods and honour. They travel confidently from the North Atlantic to the Caspian Sea, and from the Arctic Ocean to the Mediterranean. They are formidable shipwrights and great seafarers, driven by curiosity and a love of adventure.

VIDEOS: Behind the scenes

On a journey towards the silver of the Caliphate

Moesgaard Museum's new special exhibition presents new information on the Rus Vikings, and allows visitors to follow them on their travels and experience their settlements in the east.

“Many of us have a picture of the Vikings as people who travelled westwards, raided, ravaged and plundered and then returned home. These Viking expeditions to Normandy and England are well researched and well described. But so far, our picture of the Vikings’ travels eastwards, across the Baltic Sea and onwards via the great rivers to Byzantium and the Arab Caliphate, has been much less clear. For some time now, we at Moesgaard Museum have had a wish to stage a special exhibition with a new angle on the Vikings and their settlements and travels in the east. An exhibition based on the most recent finds and telling a different and, for many people, rather surprising story about the Vikings,” says Director of Moesgaard Museum, Mads Kähler Holst. 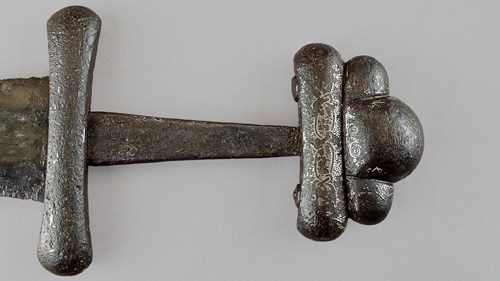 The opening up of east European countries in recent decades has given access to new sources and new research collaborations, resulting in a much more nuanced picture of the Vikings’ activities and deeds and, not least, what motivated them.

In Viking times, the world’s wealthiest superpowers were Byzantium (the Eastern Roman Empire) and the Arab Caliphate. The route to the riches in the east ran through eastern Europe and along the Russian rivers. Thanks to extensive excavations and international research collaborations during the past two decades, new light has been shed on the Vikings’ travels eastward and their settlements there. The exhibition follows the Vikings’ journeys which brought them into contact with worlds and cultures very foreign to their own: From the various peoples of the present-day Baltic area, Ukraine and Russia, all the way to Byzantium and the Caliphate. 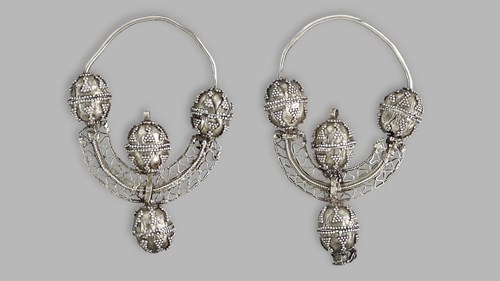 “Previously, it was thought that it was only local settled people with no appreciable contacts with the west who founded Russia’s old towns. But we now know that they were also founded by emigrating Vikings. Probably as much as 10% of the populations of these old eastern towns were Scandinavians, and they left their mark across a huge geographical area. Scientific investigations, such as DNA and strontium analyses, also contribute important new data on migration and mobility. We have been given access to the latest information about the Vikings’ travels across the Baltic Sea, and we look forward to presenting this extensive new knowledge about their cultural encounters and the resulting changes in themselves and their surroundings in this new exhibition,” says archaeologist and exhibition content coordinator at Moesgaard Museum, Pauline Asingh.

Trade with the Caliphate and Byzantium

The new special exhibition will take visitors on a scenographic journey back to a 250-year period, around AD 800-1050, when the entire east European continent is “discovered” by the Rus Vikings, who then establish colonies in foreign parts. The Vikings meet trappers in the ice-cold north, Baltic and Slav peoples further south and the nomads of the southern steppes. They travel to the Caliphate and encounter Arab merchants and trading towns: In Byzantium they challenge the East Roman emperor, and many Rus Vikings serve in the emperor’s personal bodyguard. Trade with the Caliphate and Byzantium is crucial to the Vikings’ travels and settlements. There is a battle for power and wealth and, especially, for Arabic silver. Strict control of the fur trade in the cold northern regions and, not least, the slave trade, also contribute to the Vikings’ success in the east.

Rus Vikings found towns, long-distance trade stations and transit hubs, and achieve a monopoly on trade via the Russian river systems. Meetings with the local tribes take place in a mixture of diplomacy and bloody conflict, whereby the Rus “mafia” eventually gains control over both the tribal peoples and the trade agreements with the Caliphate and Byzantium. According to the chronicler Nestor, the power elite, grand dukes to the Rus realm, are direct descendants of the Rus Viking Rurik who, in AD 862, is brought from southern Scandinavia to Russia at the behest of local tribes. Five princes, all descendants of Rurik, gather and seize power in the Rus realm. Dynastic links between the Kyiv realm, mother of the Russian realm, and Denmark can be traced back to Prince Volodymyr and King Harald Bluetooth in the 10th century AD. 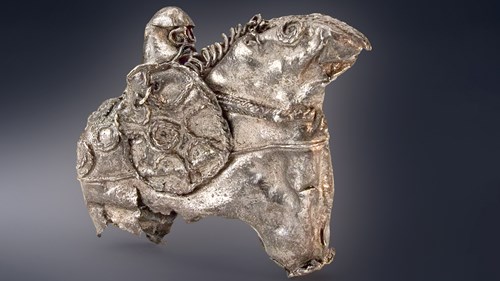 Fur, slaves and hoards of silver

The trade in furs and slaves with the Caliphate brought the Vikings vast wealth and buried hoards of silver from the Caliphate trace a clear trail along the silver route, the Volga river, to the Baltic and southern Scandinavia, where the largest slave markets were located. Some of these magnificent artefacts will be on display in the coming exhibition, and the basis of the exhibition narrative is, first and foremost, the testimony provided by these artefacts: They show that the Vikings made a huge impression in Østerled, as the great area of land for their eastern adventures was known.

In fact, more Scandinavian Viking Age artefacts have been found in eastern Europe than in western Europe. For the special exhibition at Moesgaard Museum, loans have been arranged of princely graves from the Kyiv realm and magnificent silver treasures from the Arab Caliphate, as well as weapons, ornaments and more everyday objects. Museums in Ukraine, Poland, Latvia, Lithuania, Germany, Sweden, Finland, Norway and Denmark are all contributing to the exhibition with generous loans.

Through collaboration via the Baltic museum network “Vikings in the Baltic – The Age of Innovation” and a Swedish research project “The Viking Phenomenon” involving researchers from Aarhus University, Moesgaard Museum has been given access to the most recent research results on the Viking Age’s cultural connections eastwards. The exhibition content is being developed in collaboration with VejleMuseerne, who are planning an exhibition about the Vikings in the east with a regional point of departure in the Jelling area.

The special exhibition RUS – Vikings in the east at Moesgaard Museum can be seen until September 11, 2022.

The exhibition is supported by